Is a Proposed World-Class Desert Experience Being Poisoned in Scottsdale?

Share57
Tweet
Pin1
Share8
Email
66 Shares
Ken Lynch
Lifestyle Contributor at The Arizona Report™
Award-winning writer/producer and prior correspondent for Phoenix news outlets including KTAR, KFYI, KAET and KPHO, Ken is a former Public Information Officer for the City of Phoenix and Communications Director for the City of Surprise. He writes day and night from his Scottsdale home.
Latest posts by Ken Lynch (see all)

The project is Desert EDGE, a brilliantly conceived environmental and educational immersion experience proposed for 5.3 acres within Scottsdale’s Gateway Trailhead in the McDowell Sonoran Preserve. The proposal was developed by a non-profit corporation the City Council formed expressly for that purpose in 2015.

Simply put, Desert EDGE will cement Scottsdale’s international reputation as a steward of the desert while elevating the city to new heights as a world-leading interpreter, educator, and advocate for our unique Sonoran environment. For visitors, whether newbies or old-timers, Desert EDGE will be a connection experience that is informative, immersive and deeply moving.

With a sensitivity so profound its rooftops match the desert floor to make it practically invisible from the mountains above, with imagination so inspired it includes solar power that disdains blocky panels in favor of transparent branch-like materials whose shade patterns evoke Palo Verdes, and with technology so advanced visitors can use VR on their phones or tablets to experience a desert wash in full flood, Desert EDGE represents Scottsdale’s most enlightened project since the foundation of the Preserve itself.

A small group of Scottsdale’s 246,245 residents is fighting the project so bitterly, Scottsdale Mayor Jim Lane calls it the most “vitriolic,” “outrageous” and “divisive” campaign he has ever seen. Desert EDGE Director Sam Campana has been subjected to ugly attacks, such as a false Facebook account she says was used to misrepresent her positions. There are reports that resorts supporting Desert EDGE have seen online criticism of their facilities from project opponents who have never stayed there.

Opposition leaders living near the proposed site say Desert EDGE will “destroy” the heart of the Preserve, will feature loud, late-night events and wedding receptions, and will turn the world-famous Preserve into nothing more than a city park. At least one opposition figure has announced for City Council on a platform of “saving” the Preserve.

The project will operate at the Gateway Trailhead – the very edge of the Preserve boundary – and the experience as planned should turn any visitor into a passionate advocate of preservation, something opponents should cheer. The Gateway Trailhead was explicitly built to host educational facilities, located as it is along the busy Thompson Peak Parkway, close to the 101. Significant structures, hundreds of parking spaces and an accessible interpretive trail are already there.

Tucked away along a wash next to Gateway’s maintenance building, Desert EDGE’s 5.3 acres is a tiny slice of the Preserve’s more than 30,000 contiguous acres, about .02 percent of its land area (see the “red dot” in the graphic below). No evening symposia or displays will run later than 9 p.m. Desert EDGE staff have even specifically said, “No weddings.” 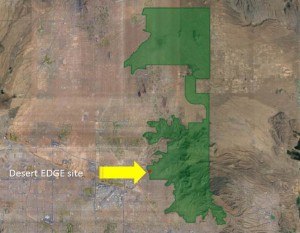 The proposed Desert EDGE site is represented by the red dot in the image above.

Scottsdale voters and the City Council have envisioned the Gateway Trailhead as a location for educational facilities for decades. Consider:

Even the capital cost of $61 million and operating costs of roughly $6.7 million per year have been anticipated for years (operating costs are expected to be covered by revenue generation and fundraising, similar to the Desert Botanical Garden and Arizona-Sonora Desert Museum).

Long-time Scottsdale architects Swaback Partners teamed with the renowned design firm Thinc – which created the 9/11 Memorial Museum in New York and other world-class projects – gathered ideas and listened to Scottsdale residents for 18 months, including opponents.

The result is even more responsive and sophisticated than Scottsdale had hoped. Swaback and Thinc are locating Desert EDGE’s 8 indoor/outdoor structures adjacent to a desert wash at a spot 24 feet lower than initially suggested and with a footprint a third smaller than the City Council envisioned. Set back 600 feet from Thompson Peak Parkway, Desert EDGE is for all intents invisible to passing motorists and neighbors (see graphic). With a right-turn-only, one-way entry off of northbound Thompson Peak Parkway, the design separates most Desert EDGE traffic from Trailhead traffic. 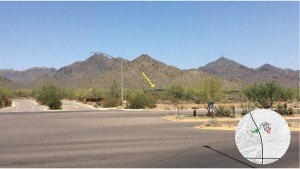 This is a modeled view of the profile of the Desert EDGE facility looking ENE from the Windgate subdivision. The intersection depicted is N. Thompson Peak Parkway and E. Windgate Ranch Road in Scottsdale.

Swaback has even increased parking capacity by about 30 percent (to 544 spaces) without expanding the parking lot footprint, a creative feat. This larger capacity is still fewer than the 600 parking spots Council approved in 2007. Designers say any seasonal overflow will be diverted to off-street parking well off-site, and visitors will be shuttled to the Trailhead.

The community engagement, inspiration, imagination and insight of the Desert EDGE design should stand for decades as a monument to thoughtful, creative public planning (see video).

Despite this impressive history of support, brilliant design, and responsiveness to community feedback (the reduced size of Desert EDGE is a result of opponents’ complaints) the Scottsdale City Council has yet to approve the project it requested. At the September 26 Council Study Session at which Mayor Lane characterized opponents as ‘divisive’ and ‘vitriolic,’ the Council directed staff to return with four distinct ballot proposals on Desert EDGE. This suggests Council may duck its decision-making responsibility and pass the buck to the public.

Nothing about Desert EDGE justifies surrendering to plebiscite-style governance. Representative democracy doesn’t work that way: Councils are elected to make tough decisions and most Councils, including this one, are courageous enough to do so on a regular basis.

Here’s hoping “vitriolic” opposition is not permitted to paralyze the community’s governing processes. Council’s first step should be to stand against “divisive” and “outrageous” attempts to co-opt its authority. Then, our elected representatives should demonstrate they are as faithful and far-seeing as the community they serve, and promptly vote to approve Desert EDGE.

Night comes to the desert all at once, as if someone turned off the light. – Joyce Carol Oates, American novelist and author of What I Lived For