The Lost Dutchman Mine: The Story is Real, and It’s Spectacular

Share13
Tweet
Pin6
Share
Email
19 Shares
Ken Lynch
Lifestyle Contributor at The Arizona Report™
Award-winning writer/producer and prior correspondent for Phoenix news outlets including KTAR, KFYI, KAET and KPHO, Ken is a former Public Information Officer for the City of Phoenix and Communications Director for the City of Surprise. He writes day and night from his Scottsdale home.
Latest posts by Ken Lynch (see all)

Note: This is part 1 of a three-part series introducing Arizona’s most famous legend, the Lost Dutchman Mine. Please enjoy and feel free to comment and share!

Exploring the story of The Lost Dutchman Mine is like opening an overstuffed cartoon closet –  instant avalanche. Murders, disappearances, wild characters, massacres, hidden gold, obsession, history, and mystery. And those are just the documented facts. Still, after 125 years, the most basic questions are still up for grabs. Does the mine exist? Is it rich or played-out? Are missing searchers murdered or lost?

Over this three-part series, we will briefly meet three people who paid in blood, sweat, tears, and treasure for the chance to chase the Dutchman legend. One of them was shot to death, the others suffered greatly. Separated by decades, their experiences offer a beginner’s guide to this strange, dark story.

The Dutchman himself was actually a German named Jacob Waltz, born in Prussia in 1808. He wandered the American West as a hard-luck immigrant farmer and miner, spending the last 30 years of his life in Phoenix, quietly prospecting and raising chickens. He died on October 25, 1891. You can see his grave in what is now Pioneer Cemetery near the Arizona state capitol.

Despite his poverty-stricken existence, small-town whispers (Phoenix had an 1890 population of 3,152) said Waltz had a secret source of gold.  He was rumored to take mysterious weeks-long trips with a burro and mining kit, afterward paying his meager bills with gold-flecked rose quartz.  As we shall see, when he died, he reportedly possessed gold ore worth $1,200.

In the 1890s, people said Dutch Jacob’s Mine, as it was first known, lay within a five-mile radius of Weaver’s Needle, the dramatic, 1000-foot-high column of volcanic rock in the heart of the Superstition Mountains. It’s a vast, forbidding place east of Apache Junction whose parapets are visible from downtown Phoenix on a clear day. 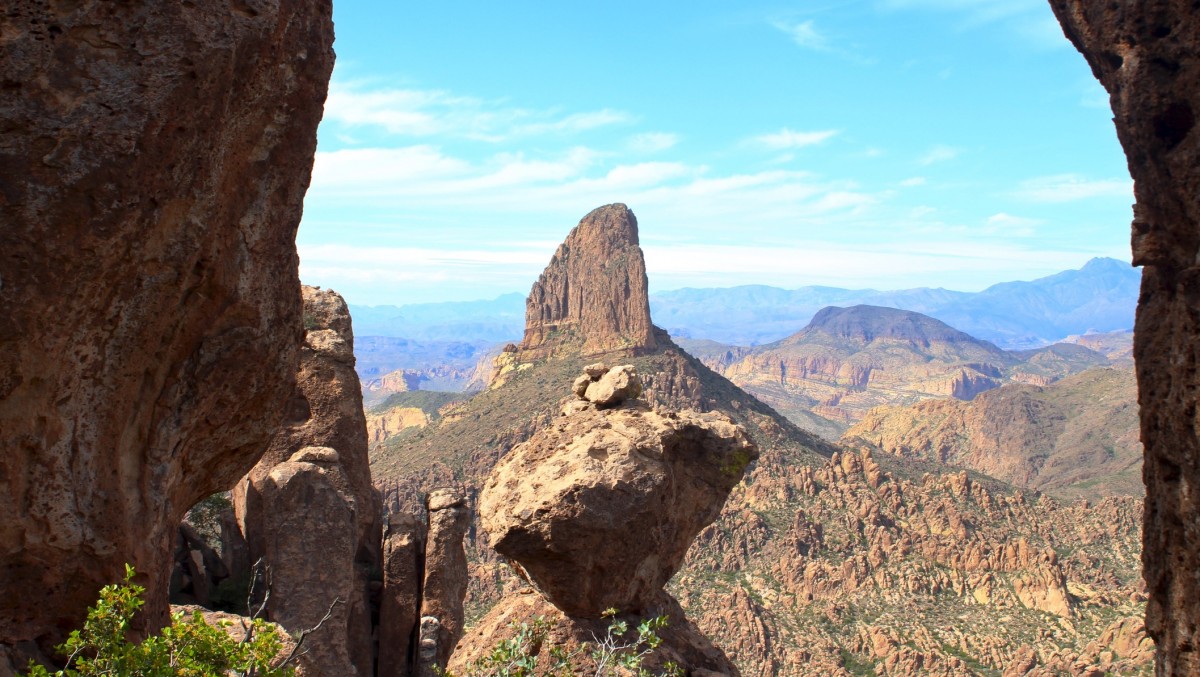 Weaver’s Needle as seen from the Peralta Trail in the Superstition Wilderness Area of the Tonto National Forest in Arizona. The Lost Dutchman gold mine is believed to be nearby.

Typical of the upside-down, left-is-right, hallucinogenic nature of the Superstitions, Weaver’s Needle is not so-called because it looks like a weaver’s needle, though that’s a reasonable assumption. Volcanic columns are often called needles. The one in the Superstitions is named for early Arizona explorer Pauline Weaver – who was a man.

The five-mile radius around Weaver’s Needle encompasses an eerie, torn, parched country of narrow, searingly-hot, brush-choked canyons and nearly vertical cliffs hundreds of feet high. At least forty people have died hunting the Dutchman, some of them murdered. The terrain and climate have killed many more, three as recently as 2010. Others hiked into the wilderness and disappeared.

Most agree the west face of Bluff Springs Mountain just north of Weaver’s Needle is the place to look – if you survive the trip.

Within a year of Jacob’s death, in September 1892, the Arizona Enterprise newspaper in Florence reported a team led by a woman named Julia Thomas had invaded the Superstitions the previous month, hunting for “Dutch Yacoob’s mine.”

Julia Thomas deserves a book of her own.  She was reputed to be of African American descent and owned a small Phoenix bakery or ice cream shop (accounts vary), certainly a unique achievement at the time. Contemporary accounts indicate she was well-known, and The Arizona Republican reported that Julia cared for the elderly Waltz in his last days, Dutch Jacob dying in a room behind Julia’s store. A local man named Richard Holmes was also present and verified most of Julia’s subsequent story.

Julia said that as he lay dying, Waltz confirmed the rumors that he had a mine in the Superstitions, and described its location. He reportedly bequeathed Julia a box of ore worth $1,200 – from the mine, he said. She was sure she could find it.

According to Julia, Waltz claimed he fled the mountains after Apaches murdered his partner at the mine site years before, convinced he too would die if he ever returned. He told her the mine was not his discovery; it was a previously-worked site abandoned by a once-wealthy Mexican silver mining family named Peralta.

Waltz said more than 20 years before, he and his partner Jacob Wiser interceded in a brawl in Arizpe, Sonora that saved the life of Don Miguel Peralta. Don Miguel told the men of a ‘lost’ Peralta mine in Arizona, a shaft of gold, not silver. After the Mexican-American War in 1848, the mine was no longer in Mexican territory and regardless, was in the midst of hostile Apache country, he said. Apaches had slaughtered the last Peralta caravan in 1848, scattering the gold and covering the mine. Peralta had no desire to make the dangerous and illegal journey but offered to share the location of the mine in return for a portion of the recovered gold.

A classic Western tall tale.  And yet…

The Peraltas of Arizpe did operate gold and silver mines and did have mining interests in Arizona in the pre-war years. The Massacre Grounds and Massacre Falls in the Superstitions were named long ago to mark the Peralta slaughter. Bones, rotted saddlebags, and – reportedly – mined gold ore turned up in the vicinity of the Massacre Grounds for decades afterward. Nevertheless, historians still can’t agree that the massacre ever happened. Like many parts of the story, you decide what you wish to believe.

Waltz said he and Wiser had no trouble finding the site. After Wiser’s murder, Waltz said he covered the mine, packed what ore he could carry and abandoned the Superstitions for good, according to Julia. 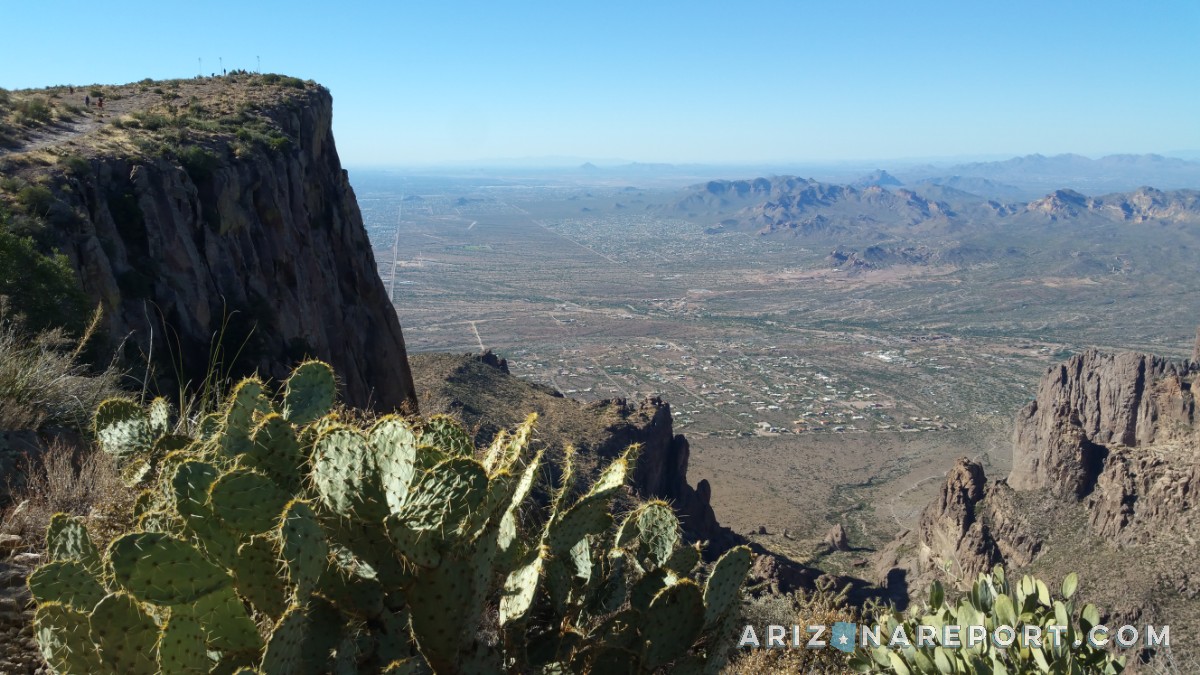 View from the Superstition Mountains in Arizona looking west down into the Apache Junction and the Phoenix Valley. This location is 2.5 miles due west of Weaver’s Needle.

There are contemporary anecdotes but no proof that Waltz carried gold ore to Florence or Tucson to be assayed and cashed. It is possible these transactions happened but are undocumented – local intermediaries would buy metal from individual miners and bundle it for shipment and sale to US Mints. It was a cash business.

On the other hand, Jacob Waltz did not die a wealthy man. That he left $1,200 worth of ore for Julia has some eyewitness support, but no hard evidence.

But he did leave a burning desire in Julia Thomas to find his mine, a mission that cost Julia her business her savings, and also, many believe, her mental equilibrium.

Next:  Julia Thomas launches the first hunt for the Lost Dutchman, changing her life for the worse. A young veterinarian from the East Coast gets mixed up in the politics of the Mexican revolution, leading to mysterious Dutchman maps and a family tragedy deep in the Superstitions.

Don’t gain the world and lose your soul; wisdom is better than silver or gold. – Bob Marley, Jamaican reggae, ska and rocksteady singer-songwriter