Holes In Your Citrus? Here’s the Likely Culprit.

If you are home shopping around Greater Phoenix, there is a subtle pest infestation clue that you may be stepping right over. Examine the fallen citrus fruit. Oranges are a roof rat delicacy.

Look for one or more quarter-sized holes in fruit on the ground. The citrus rind will be hollowed out with near-surgical precision. This adroitness is the calling card of the black rodent.

Don’t bank on catching them in the act though. These vermin are mostly nocturnal. Your earliest clue may be a barely-audible scratching sound coming from the attic at night.

Rattus rattus is not native to Arizona. Roof rats made their debut in the Phoenix metro about 20 years ago. The species originates from Asia but has since made a home in southern U.S. states, especially along the coasts. Their acrobatic ability and climbing skills are credited with allowing them to stow away on ships for centuries. They are also known as ship rats or black rats. Some suspect that they hitched a ride to the Valley of the Sun on a fruit truck.

In December 2001, the City of Phoenix began to investigate complaints of elevated rat activity in the Arcadia area. Calls reporting rodents to Maricopa County Vector Control jumped 6300% in 2002 from the year before. The epicenter of the rodent incursion centered on the area between 32nd and 68th Streets and Camelback and Thomas Roads.

Just 80 years ago, this neighborhood in the shadow of Camelback Mountain was known for its vast citrus farms. Today, Arcadia is an upscale neighborhood with home prices ranging from $1,000,000 to $6,000,000. It’s the fruit of these venerable remaining citrus trees that hastened the growth of the roof rat population. Oranges are a ready-made food and water source for rodents.

The protracted rodent problem began to overrun local infrastructure. In 2002, roof rats chewed through telephone lines in Arcadia. The City of Phoenix promptly appropriated more than $100,000 to get out in front of the scourge. Local government officials responded with community meetings in February 2002 that more than 150 Arcadia residents attended.

Over 6,200 bait traps were suspended from power poles around Arcadia and adjacent neighborhoods in Scottsdale. In the end, less than 1% of the aerial bait was consumed and that effort largely foundered. However, homeowners at ground level had much more success with bait stations and yard cleanup efforts led by a neighborhood coalition.

The quick response was necessary because roof rats reproduce at an astonishing rate. The female roof rat reaches fertility at only 3 months old. Her gestation period is only 21 days the litters have an average of 7 pups. With multiple annual breeding periods, the exponential math is staggering. One breeding pair and their progeny can result in 6,000 to 7,000 rats per year.

Within two years of the initial sightings, the roof rats were reported a few miles to the northeast in the McCormick Ranch community. The first confirmed sighting in the West Valley was 2004. By 2007, roof rat populations had established a foothold in almost every corner of the Valley. Rat populations quickly moved outward to Ahwatukee, Mesa, Scottsdale, Paradise Valley, Tempe and the North Valley of Phoenix.

In addition to chewed holes in fallen citrus, there are several more indications that roof rats may have settled in at your home:

Roof rats are dark brown to black in color. Length of the adult body is 7-8 inches. The roof rat has a dark, scaly tail which is longer than the body. Ears are flesh colored and almost hairless. The muzzle is pointed. Eyes are large, glassy and black. 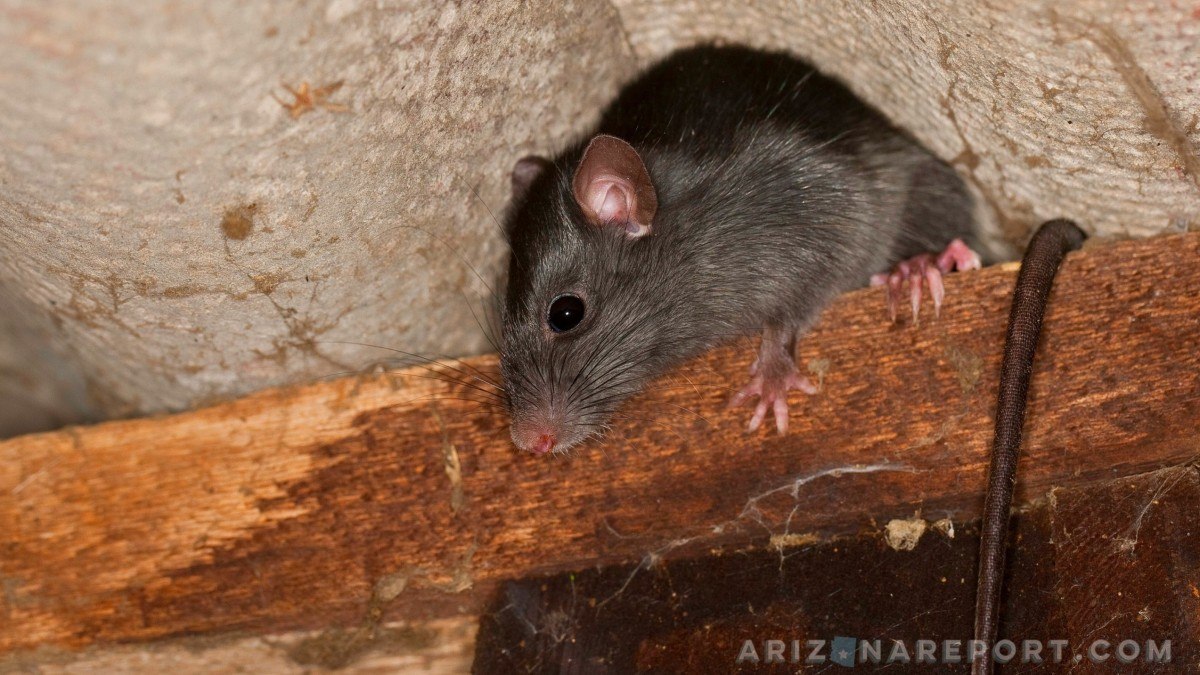 Where are roof rats found?

The “roof rat” moniker is derived from their ability to spend 90% of their time four feet or more above the ground. They are excellent climbers. In addition to your roof and attic, they use trees, oleanders, fences and overhead utility wires to travel. Scavenging for food is one of the only reasons that they spend time on the ground. It is rare for them to burrow into the earth to make a nest.

A roof rat’s range is approximately a 200-300 foot radius from the nesting area. That is about one football field. If your neighbor down the street has roof rats, they can quickly become your problem too.

Roof rats can access your attic and living space through holes on the exterior of your home of only half an inch in diameter.

How to control roof rats around your home

Does anything else make holes in citrus fruit?

Yes. Birds may peck at citrus on the ground leaving small holes. However, nothing else makes a clean, hollowed shell out of an orange rind like a roof rat.

Roof rats will congregate in areas where citrus is abundant because it is a water as well as a food source. They have also been known to consume peaches, pomegranates, and avocados.

If you have questions about roof rats in Phoenix, contact Maricopa County Vector Control at 602-506-0700. The office is responsible for investigating citizen complaints about rodents, mosquitos, flies and pigeons.

Have you experienced roof rats in your Phoenix home? If so, leave me a comment below. What part of the Valley do you live in? What methods of eradication have you used with success?

I don’t like rats, but there’s not much else I don’t like. The problem with rats is they have no fear of human beings, they’re loaded with foul diseases, they would run the place given half the chance, and I’ve had them leap out of a lavatory while I’ve been sitting on it. – David Attenborough, British journalist, naturalist and producer of the BBC’s documentary series The Living Planet