How I Hunt Scorpions Around My Phoenix Home After Dark

When I moved to Arizona, I had no desire to come face-to-face with one of its prehistoric desert dwellers. But when my wife and I found a home in Anthem with great mountain views at the edge of the desert, scorpions came with the territory.

Now I’m a real estate broker by day and an accomplished scorpion hunter by night. It is mostly for entertainment purposes, but I sleep a little bit better knowing that I have made a dent in the local scorpion population. I have also made peace with the rare and reclusive neighborhood tarantula that likes to feast on scorpions.

My wife is always eagerly interested in my updated scorpion kill count. “Did you catch anything tonight?” she often asks. If the tally is too high, I try hard to change the subject.

How do you find scorpions?

On one recent evening, I captured the crusty arthropod in the photo above in special lighting. He was low to the ground outdoors on my yard wall. By the way, I did not alter the colors in my photo a bit. That is exactly how scorpions glow under UV blacklight. Nuclear goo green. The fact that they glow under these conditions is their Achilles’ heel and is simultaneously your key to success.

An inexpensive blacklight flashlight is your most effective tool. 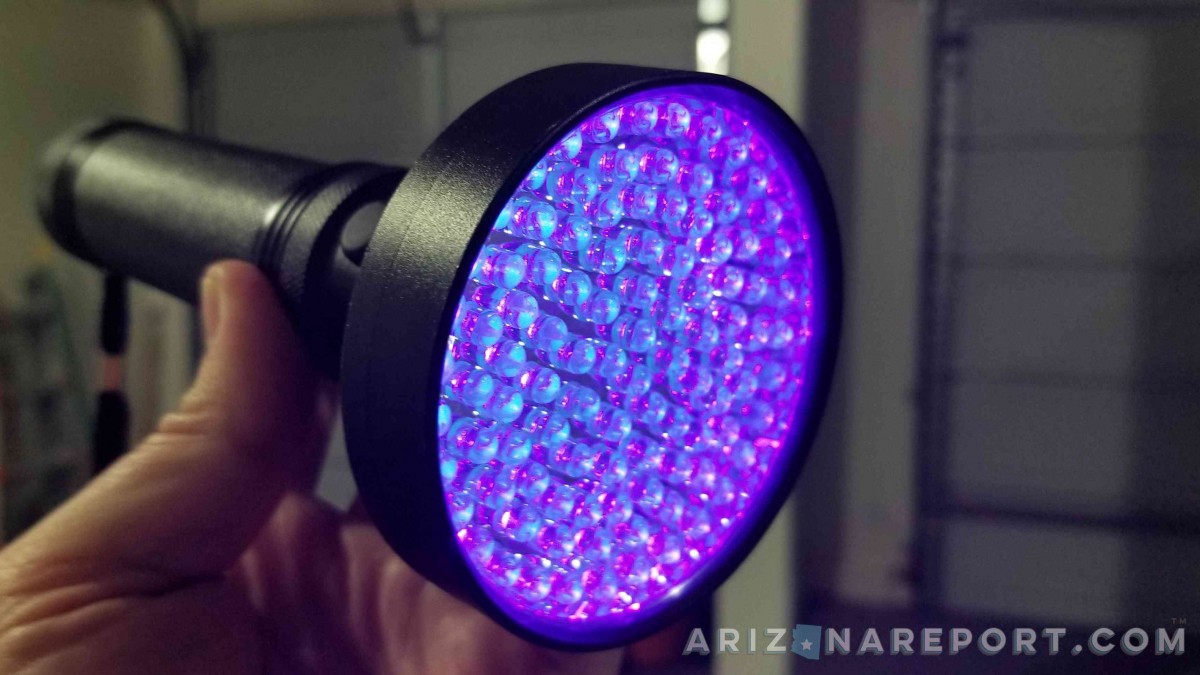 This 100-LED blacklight is the best tool that I have for finding scorpions around my Arizona home. This particular model was purchased on Amazon for $17 and uses 6 AA batteries.

I haven’t found any closed-book definitive answers about why scorpions glow under black light. However, there are a few theories. They might glow to ward of predators who can see in this light spectrum, unlike humans. Another theory posits that the scorpion’s body collects small amounts of UV light from nighttime sources like the moon and stars. It then reflects the light back out into its environment where it sees its surrounding best in the UV spectrum.

What’s in the bag?

If you are interested in hunting, you will need the blacklight and the right tools. I have developed the following scorpion-hunting tool kit. Most of these items were purchased on Amazon or the local hardware store. It’s deadly effective and I spent around $50.

I keep my tools and chemicals on a shelf in the garage. Make sure your kit is in a grab-and-go location, but out of the reach of children and pets.

A word of advice. Don’t buy a tiny $5 blacklight. I tried the weaker flashlights. They eventually found their way to my trash can. Larger blacklights allow you to visually sweep large areas of your yard quickly and efficiently. It takes me 10 minutes or less to check my yard at night with the right blacklight. Smaller blacklights will save you a few bucks, but will also triple your search time and error rate.

Where to look for scorpions

Scorpions love dark hiding places during the day. However, most will be visible in the open at night while they emerge to hunt insects. Check near the base of walls with your blacklight.

Next, turn over rocks and brush away debris (with your leather gloves on) near your home’s foundation. Damp, dark, hidden areas near moisture sources are popular. Check the area around your hose spigot, pool equipment enclosure or air conditioning condensate drain pipe. Their glow is highly visible. If you have a bright blacklight (mine has 100 LEDs) the scorpions will be visible from 20 feet away or more.

Scorpions are climbers, too. Check exterior stucco walls, tree trunk bark and drywall inside a home with your blacklight. The only surfaces that I have seen them unable to scale are slick surfaces like plastic jars and glass containers. For this reason, homeowners often find them trapped in tubs or sink bowls, unable to climb out.

Scorpions can fit into cracks in the exterior of your home as narrow as the thickness of two stacked credit cards (1/16″). As a result, tiny openings in your home’s exterior can be entry points. Check weather seal around exterior doors as well as dryer and bath vents.

I first turn off all exterior and interior lights to the home. The yard surrounding the home must be dark in order for the UV black light to be fully optimized. My most memorable trophy hunts are a few hours after dark. Around 9 pm for best results.

The can of brake parts cleaner is always nearby and ready to deploy if needed. More on that below.

Once I have spotted a scorpion, I open the lid to my container and set it on the ground. With my tweezers in hand and flashlight in the other, I aim for the tail. If I grab the scorpion by the body, his stinger would be able to move freely. When I have the scorpion by the tail, I drop him in the jar on a pre-soaked paper towel with naphtha fluid which will neutralize him within a minute.

If I miss my target, the scorpion will be scrambling for cover into a wall crevice or under the patio. That is when I use the brake parts cleaner fluid as my final shot. It is amazing to me how quick the spray works.

Depending upon your comfort level and dexterity, you may opt for any of the three scorpion capture methods: tweeze, spray or squoosh.

I prefer the tweeze method. This allows me to collect the specimens in a jar for later study and show them to my nephews.

The most timid among us may opt for the use of the spray method using the aerosol can of brake parts cleaner with an extension tube. It’s a highly effective technique handed down to me by my scorpion mentor, neighbor Tom. The advantage is that the spray can be deployed 5-8 feet away from the scorpion. A direct application of brake parts cleaner spray will send the scorpion to a writhing death within 15 seconds. This is where the safety glasses come in. Use outdoors only.

The squoosh method works best if a scorpion catches you off-guard in your home and the tool kit isn’t nearby. Don’t take the time to go to the garage for tweezers because it may scurry away. Grab a shoe. You will be able to get within a foot or two of the scorpion if you move slowly. However, when you strike, be fast and deliberate, because that’s when they run for cover.

Where are the scorpions around Phoenix?

Not every neighborhood in Phoenix has scorpions. Many homeowners who have lived for decades in the central parts of the Phoenix metro have never seen a scorpion. It seems as if development drove them out of these areas years ago. In fact, I have lived in several homes throughout the Phoenix metro and have only had scorpion encounters at one of them.

It’s the location that matters. If you live within one-half mile of the open desert, you will become more familiar with Sonoran Desert critters like scorpions, rattlesnakes, and tarantulas. In fact, new home construction is almost always on the periphery of the Phoenix metro. If you are building a new home in one of these areas, you may need to factor in the monthly cost of professional pest treatment to the cost of ownership. Your builder won’t bring that up in casual conversation.

Ask a rural resident of Cave Creek, Apache Junction or Rio Verde about scorpions and you will likely hear some colorful stories. Alternatively, residents of established neighborhoods like Coronado or Encanto-Palmcroft may give you a quizzical look.

What kind of scorpions are found in Arizona?

Ninety percent of the scorpions that I find around my home are the Arizona bark scorpion variety. They have a yellowish or light brown color in normal light. This species is easily identified because it lays its tail curled up on the ground when at rest. Other scorpion species carry their tails erect.

The giant hairy scorpion is larger and more menacing than the Arizona bark scorpion, but not as venomous and is more docile. Some people even keep them as pets. A real estate client of mine found one of these under the utility sink in his garage last year. He lives in a brand new Taylor Morrison community in Peoria. Home construction around him probably stirred up the scorpions in this area next to the Agua Fria River. He hasn’t seen one since.

The Arizona bark scorpion has a range from western New Mexico into southern California. It is also found further south into the Mexican states of Chihuahua, Sonora and Baja California. Here is one of my earliest specimens: 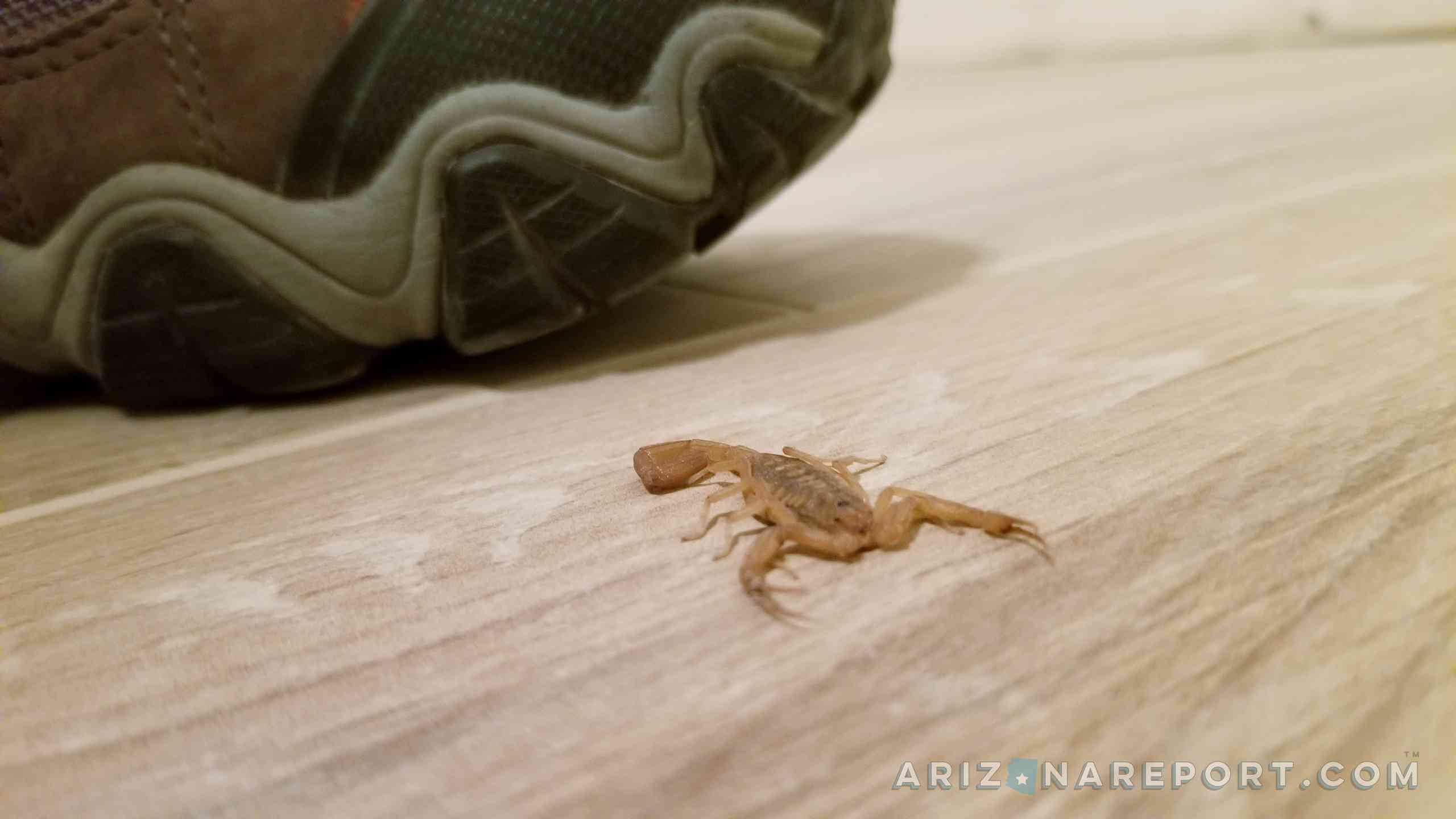 I snapped this photo of the first scorpion (but not the last) that we found in our home after we moved in. He was ushered away a few minutes later. This Arizona bark scorpion was about 2 inches long and typical for the size that I’ve seen around my home. The Arizona bark scorpion is identifiable because he lays his tail curled up on the ground.

When are scorpions active?

Keep an eye on the thermometer. When nighttime temperatures reach 70F/21C, scorpions will begin to emerge from winter hibernation.

Your most likely chance to encounter one is from early spring to late summer. Around Phoenix, I have noticed that scorpion sightings begin to pick up in late March and run through October. Activity is highest July and August when temperatures are hottest and monsoon season is underway.

Scorpions are nocturnal. Nighttime is when they feed on insects. Scorpions are much more difficult to spot during the daytime when they are camouflaged against the desert environment and are hiding from the sun. Hunting in the evening will yield the best results.

My scorpion problem was exacerbated for two reasons. First, my home backs up to the open desert. Second, the home that I purchased had been vacant for 16 months and the seller lived in California. It had been years since the home had been professionally treated. That allowed scorpions to set up shop.

I use Responsible Pest Control, a Phoenix pest control firm to spray the exterior of my home’s foundation for scorpions and insects. It costs me about $45 per month. I use the service for ten months per year. I discontinue the treatments in December and January to save money when scorpion activity is diminished due to colder temperatures.

How many scorpions do I see around my home?

In the first year, I found 3 scorpions inside my home. My nighttime hunts outdoors uncovered another 40 or so over the summer months. Now that the home is being professionally treated, I expect much smaller numbers this year. My wife would prefer zero.

It’s common in rural Ireland to pick up a nickname that relates to an animal, bird, or a spider. Mine became ‘scorpion’ because I fought back, and scorpions are docile creatures until pushed too far. – Walter O’Brien, Irish businessman and information technologist