The Remarkable Forgotten History of Thunderbird 1

Share
Tweet
Pin
Share
Email
Ken Lynch
Lifestyle Contributor at The Arizona Report™
Award-winning writer/producer and prior correspondent for Phoenix news outlets including KTAR, KFYI, KAET and KPHO, Ken is a former Public Information Officer for the City of Phoenix and Communications Director for the City of Surprise. He writes day and night from his Scottsdale home.
Latest posts by Ken Lynch (see all)

What do 1940s film star Gene Tierney, the artist behind the Touchdown Jesus mural at Notre Dame and the classic puppet TV show Thunderbirds have in common?

“A dusty quarter section of land at 59th Avenue and Greenway Road in Glendale” would probably be your last guess.

But it’s true. So much has happened on this unassuming patch of desert the stories are almost too numerous to tell.

Today the site of Arizona Christian University, 75 years ago the property was a newly opened airfield called Thunderbird 1.  Even more remote than tiny Phoenix (pop. 65,000) 20 miles away, when it sprang to life in the spring of 1941, it nevertheless instantly became one of America’s most cosmopolitan places. Until the end of World War 2 four years later, more than 15,000 young men from the US, China, and throughout the British Empire crammed the barracks and hangars, speaking half a dozen languages, training in the grim art of aerial combat. 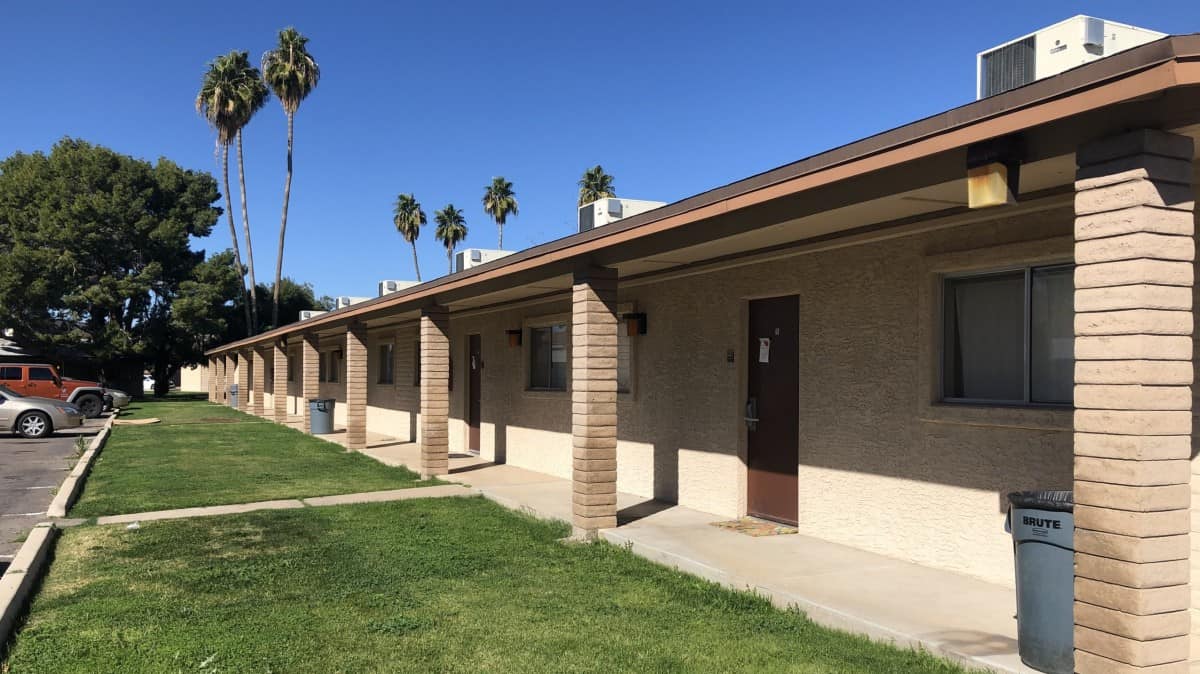 Three 3500-foot runways fanned out north of Greenway while south of the road, Thunderbird 1 featured barracks, a control tower, hangars, an administration building and a huge ramp for hundreds of Boeing PT-17 Stearman trainer aircraft.

It was all the result of a carefully calibrated gamble by a group of Hollywood stars-turned-real estate-speculators, headed by legendary agent/producer Leland Haywood.

In the late 30s, Army Air Corps Chief Hap Arnold was lobbying to expand pilot training for the war many could see coming, but Congress refused to fund it.  Out in California, Haywood heard of Arnold’s plans, sensed opportunity, and lined up investments from his clients Jimmy Stewart, Clark Gable, Ginger Rogers and Henry Fonda (the ex-husband of actress Margaret Sullavan, Haywood’s second wife).  The team planned to build pilot training facilities in Arizona and staff them with instructors, confident Arnold and the Army Air Corps would pay for their services.

Which is exactly what happened.

Construction of Thunderbird 1 began in January of 1941 and was finished by March.  Arnold immediately gave the group a contract, and Haywood immediately began expanding, building Thunderbird 2 (today’s Scottsdale Airport) and Thunderbird 3 in Mesa, rechristened Falcon Field by British pilots who thought the name lacked savoir fare.

The star-studded ownership group lent a ton of Hollywood panache to Thunderbird 1. The peripatetic Haywood, whose hits included the stage and film productions of the Sound of Music and The Old Man and the Sea and who founded Southwest Airways, the nation’s first no-frills commercial airline (using converted military cargo planes), hired painter and muralist Millard Sheets to design the facility. Inspired by the Pueblo tribe’s legendary thunderbird, Sheets created a scheme that from the air presented a striking semblance of the mythical bird, with the control tower as the feathered tail,  the admin building and barracks as the body, the hangars as wings and a garden as its head and beak. Local builder Del Webb – later famous in his own right – put it all together.

Refurbished in 2007, the control tower is now a student lounge at Arizona Christian. Many of Sheets’ murals survive, too, the most famous being the Word of Life at Notre Dame’s Hesburgh Library, popularly known as Touchdown Jesus. 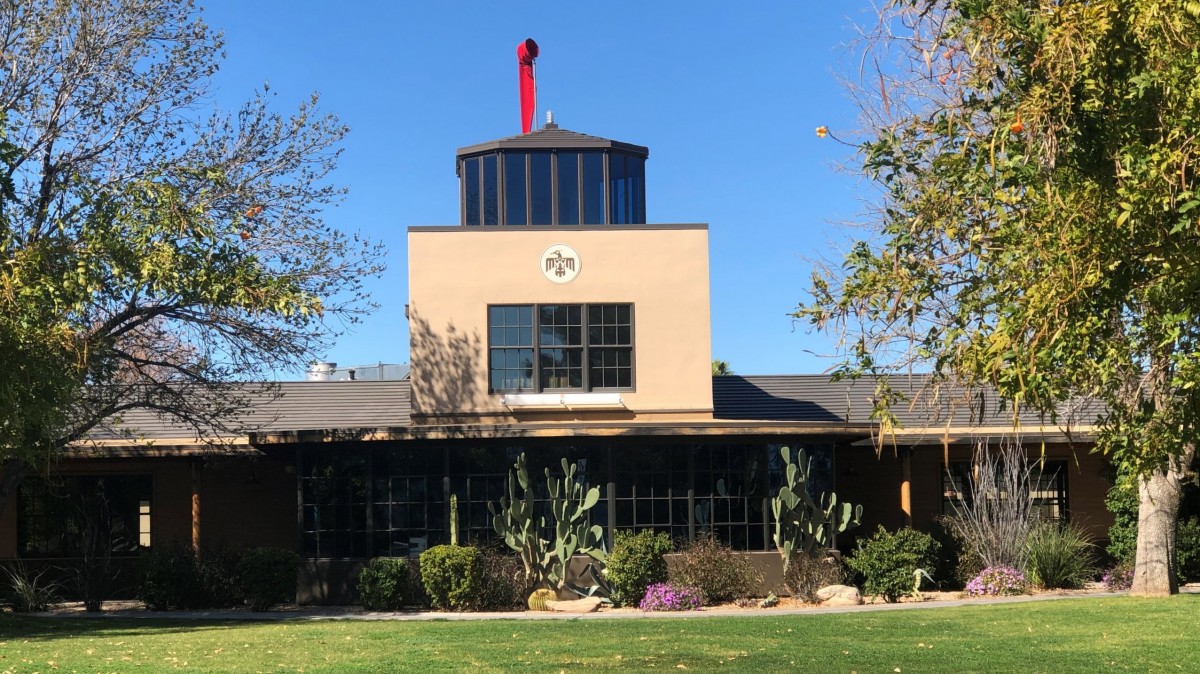 The refurbished Thunderbird 1 control tower on the campus of Arizona Christian University. Photo by Ken Lynch.

Inevitably, filmmakers arrived at Haywood’s desert enterprise, and in 1942 director William Wellman shot a love story/propaganda film in the Valley called Thunderbirds, using the field as a backdrop.  Ostensibly a boy-chases-girl story featuring Gene Tierney and Vincent Foster, the film emphasized the courage of pilot trainees preparing to fight the good fight.  Heart-stoppingly beautiful, Tierney’s natural style was made for the crisp Arizona light – she later said she never looked better on film. 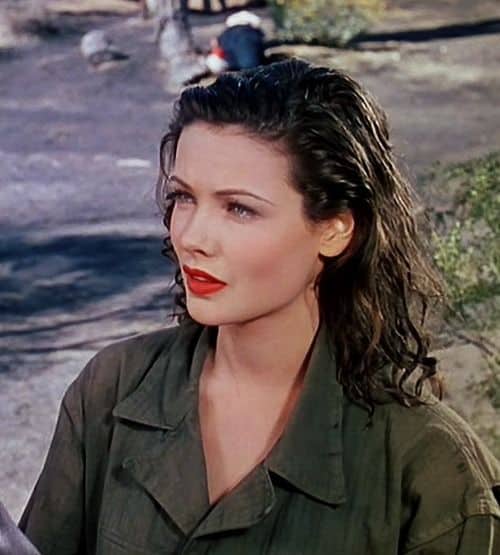 South African novelist Lionel Abrahams was another luminary who passed through as a pilot trainee. He regaled his TV producer friend Gerry Anderson with tales of his time in the desert, stories Anderson never forgot.  When casting about for a name for his animated marionette TV series about a family of futuristic all-male space daredevils, Anderson called the show Thunderbirds.

By the time the war ended, the Army Air Force owned Thunderbird 1 and declared it surplus. It was quickly purchased by AAF Training Commander Lt. Gen. Barton Yount for $1, raising eyebrows in military and media circles. The sale stipulated the site be used for educational purposes, and Yount opened the American Institute for Foreign Trade in October 1946, serving as its president.  The first class was comprised of 285 veterans, 98 percent of them on the GI Bill.

Eventually renamed the Thunderbird Graduate School of International Management, the institution became world-renowned and merged with ASU in 2014, moving operations to downtown Phoenix.  Arizona Christian relocated to the site from their north Phoenix location soon after.

Today there is no trace of the three Thunderbird 1 runways north of Greenway Road; the area is entirely residential. No memorial marks the spot.

However, those thousands of young pilots were not forgotten.  In 1953 at nearby Luke Air Force Base outside Phoenix, the USAF formed its first precision flying team. Strongly influenced by the Native legend, the Sheets design and the impact of the Thunderbird fields on military aviation, they designated the unit the US Air Force Thunderbirds, the name it retains today.

On the present-day ACU campus you will find a substantial monument to the role Thunderbird 1 played in America’s war effort and a memorial plaque to the pilots trained to fight – and sometimes die –  in the skies over Europe and Pacific Asia.* In addition to the control tower, a barracks and the original administration building are still at work, serving the students of ACU. 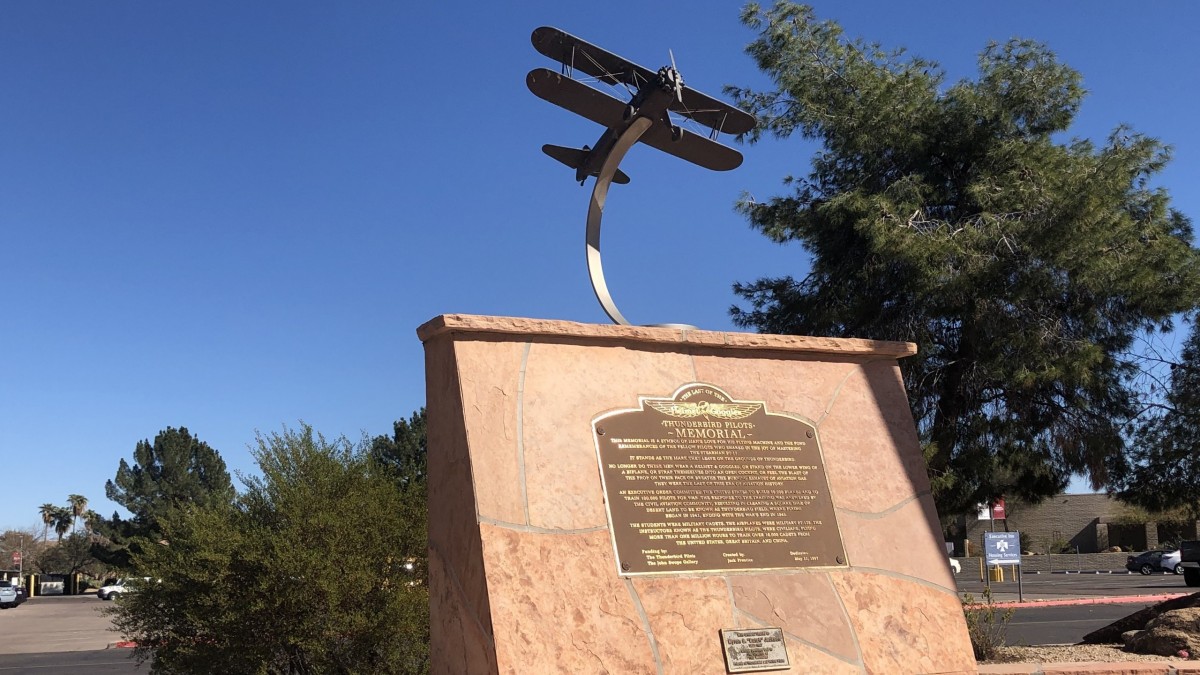 The memorial to the pilots of Thunderbird 1 on the Arizona Christian University campus. It was erected in 1997. Photo by Ken Lynch.

Unlike most historic Valley airfields buried, paved over and forgotten, Thunderbird 1 still plays a vital part in Valley life, and seems destined to retain a well-deserved place in our community memory.

* Original investor James Stewart became a pilot himself and saw heavy combat in Europe.  In no way a war profiteer, Stewart enlisted and convinced his superiors to assign him to a B-24 bomber squadron, flying more than two dozen missions over Germany.

I remember the 1940s as a time when we were united in a way known only to that generation. We belonged to a common cause-the war. – Gene Tierney, actress and star of Thunderbirds