Ghosts of WWII – Phoenix Airfields Beneath our Feet

Share24
Tweet1
Pin2
Share
Email
27 Shares
Ken Lynch
Lifestyle Contributor at The Arizona Report™
Award-winning writer/producer and prior correspondent for Phoenix news outlets including KTAR, KFYI, KAET and KPHO, Ken is a former Public Information Officer for the City of Phoenix and Communications Director for the City of Surprise. He writes day and night from his Scottsdale home.
Latest posts by Ken Lynch (see all)

It is not as creepy as finding out you live on top of an abandoned cemetery Poltergeist-style, but in the Valley, there is a fair chance that your house – or office or warehouse or showroom – is built over the remains of a long-abandoned airfield.

Dozens of forgotten fields are buried beneath our feet – airports that were once prominent landmarks or welcomed thousands of young pilots learning the grim business of aerial combat during WWII.

The buzz of aircraft everywhere in the Valley reminds us that we live in an aviator’s paradise of clear skies, dry weather, calm winds, and practically unlimited visibility. Military aviation discovered this long ago, peppering the Valley with dozens of training bases and auxiliary airfields before and during WWII.

Scottsdale Airport began life as an Army Air Force training base. So did Mesa’s Falcon Field, whose name was chosen by British pilots who thought its original moniker, Thunderbird Airfield #2, lacked panache.

But the real romance is in what lies beneath – fields obliterated by growth and changing times that speak of the danger of war and the forgotten adventure of building a city in the last American wilderness.

Which of these buried memories is in your neighborhood?

Paradise Airport (just north of 19th Avenue and Peoria Avenue) Teen aviation bug Earl Pylant opened this two-runway airport in the 1930s. Pylant enlisted in the Army Air Corps in 1942 and allowed the Army to use his field, which became Thunderbird Aux #3, a relief airport for Army Air student pilots.

After the war, Pylant built two hangars, a terminal building and a new runway, offering flight training, aircraft sales and repairs. Pylant sold the airport in 1951, and it continued to grow, the new owners improving the runway and opening a cafe. But the lucrative housing boom doomed a truly thriving airport, and residential developers took over in 1960. Today, no trace of Paradise remains.

Happy ending: Paradise owner Tom Kilbourn relocated to 7th Street and Deer Valley Road, installing a tomato hothouse atop a pile of dirt as a makeshift control tower. The site became today’s Deer Valley Airport in 1971, a busy two-runway operation owned by the City of Phoenix. 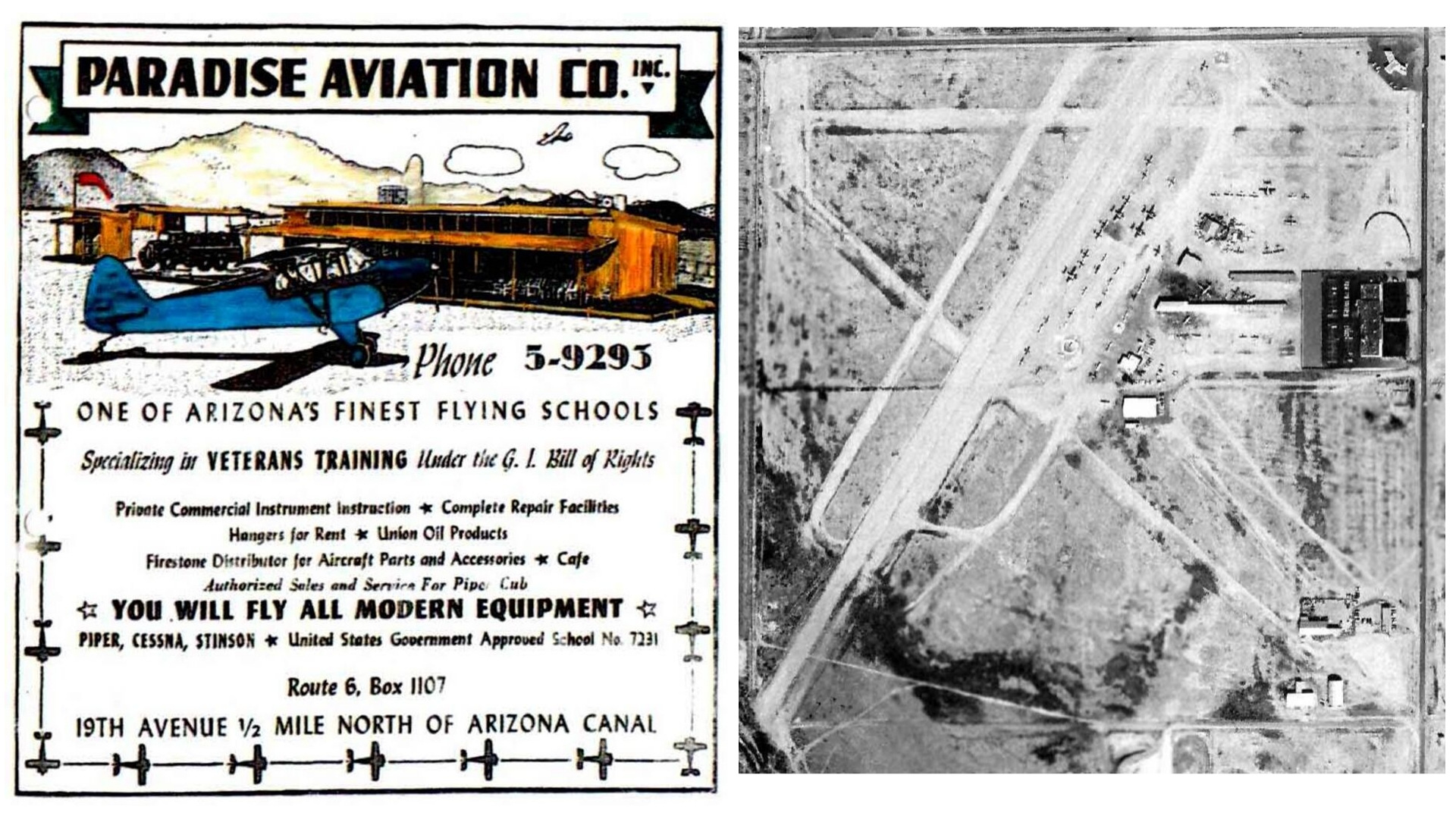 Fram Airfield (southwest of 99th Avenue and Maryland) Ray Fram built this single-strip, 2200’ facility on the family farm after being smitten by watching aerial duels from the trenches of France during WWI. In its earliest days, Fram Field’s hangar was part of his farmhouse, expanded with modified chicken pens. Ray taught hundreds of pilots to fly from his tiny airport and somehow, Fram Field survived for 50 years, finally winking out in 1983 when Glendale Airport opened a few miles to the west. Today, the site is agricultural fields. A concrete slab at 99th and Maryland avenues could be the remains of Fram Field’s runup area.

A photograph of Fram Field in Phoenix, Arizona taken in the 1960s. Ken Lynch

Airhaven (south of Indian School Road between 27th and 35th avenues) Airhaven’s two X-shaped runways were an instant Phoenix landmark when it opened in 1946. Takeoffs to the northeast were adventurous for pilots and moviegoers alike. The 75-foot Indian Drive-In movie screen, just 1,000 feet from the end of the runway, forced fliers to make steep climbing turns. As development overtook the area, Airhaven was used less and less and flickered out in 1961. An industrial area now, no traces of Airhaven – or the Indian Drive-In – remain.

North Phoenix Cactus Airport (northeast corner of Cave Creek and Cactus roads) This 2-runway field was notorious for its 960 acres of bare dirt, courtesy of the chemical borate, a since-banned substance that stunted vegetation. Cactus opened in 1942 as an auxiliary for the Army’s Thunderbird Field #2 (now Scottsdale Airport). Its 3500-foot east-west runway ran parallel to Cactus Road, the west end terminating near today’s Denny’s restaurant. A 3,000-foot SW/NE runway extended from today’s 24th Street and Cactus, with planes climbing out over the current intersection of the 51 and Thunderbird.

Turf Paradise The famous horse track opened in 1956 (19th Avenue and Bell Road). Two years later, the track added a 3,000-foot private runway with hangars and fuel service, catering to horse owners and wealthy bettors. It transitioned to general aviation in 1964, calling itself Turf Paradise Airport. The field offered tie-down service for light planes and hosted the Turf Soaring School, which trained glider pilots. The Airport suffered an undignified demise when it was closed to make room for horse stalls in 1977. All traces have since disappeared. Turf Soaring School survives to this day, however, operating under the same name at the Lake Pleasant Airport near 99th Avenue and Carefree Highway.

Glendale Air Haven Originally a private field, Glendale Air Haven’s 2400-foot dirt runway extended north/south just west of the 6-way intersection of Olive, 75th and Grand avenues. The airport opened to general aviation in 1966 after the Air Haven and Paradise airports in Phoenix closed. The City of Glendale took over in 1970.

Air Haven’s single short runway became overtaxed by increasingly heavy use, and in 1981, a landing Cessna collided with a truck on Grand Avenue, killing the driver. The next year, Glendale closed Air Haven in favor of today’s Glendale Municipal Airport. Now, the area is a mixture of industrial and agricultural use. The original runway alignment and some of the old pavement is still visible. 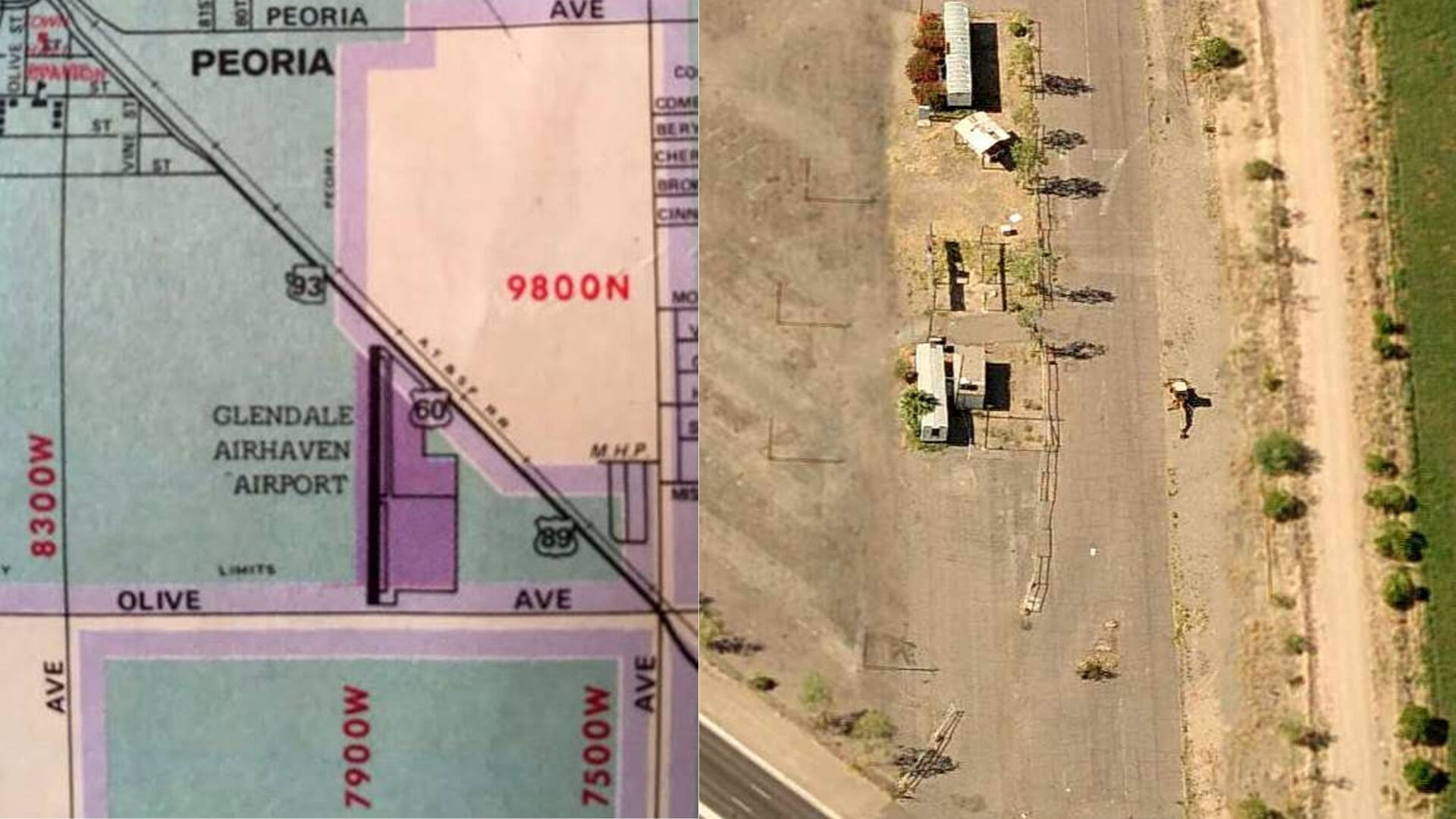 Glendale Air Haven airport is seen here on a 1983 map (left) and in a 2006 aerial photograph (right). The painted runway 17 marker is barely visible near the top of the photo. Ken Lynch

Although these and many other Valley airports faded into oblivion without so much as a dusty sign to mark their presence, two abandoned airfields in the West Valley are properly memorialized. Their stories, plus surprise appearances in early Valley aviation by some of Hollywood’s’ biggest stars, in Part 2.

I was a child of World War Two. I saw films of pilots taking off from aircraft carriers and decided that was the only thing I wanted to do. And it had to be flying from sea carriers. Airfields were not enough. – Gene Cernan, American astronaut, fighter pilot and the 11th person to walk on the Moon during the Apollo 17 mission