10 CAP Facts: The Canal that Made Modern Arizona

Share
Tweet2
Pin12
Share
Email
14 Shares
Ken Lynch
Lifestyle Contributor at The Arizona Report™
Award-winning writer/producer and prior correspondent for Phoenix news outlets including KTAR, KFYI, KAET and KPHO, Ken is a former Public Information Officer for the City of Phoenix and Communications Director for the City of Surprise. He writes day and night from his Scottsdale home.
Latest posts by Ken Lynch (see all)

America has 3200 counties. Which one do you think welcomed the most newcomers in 2017?

The US Census Bureau says we added 73,000 people last year and topped 4.3 million for the first time.

When you’re splashing around with the kids in the pool or launching your tee shot into the drink, you may wonder how a place that gets (maybe) seven inches of rain a year can survive as a thriving metropolis, or support the millions heading our way in the next 20 years.

A big part of the answer flows underneath those modest bridges you drive across all over the Valley:  the Central Arizona Project (CAP) canal, one of the most under-appreciated engineering feats of all time. Its sheer audacity still staggers the imagination and makes today’s public projects seem as inspiring as bus shelters.

The CAP is a fully-constructed artificial river – longer than the Allegheny and much longer than the Hudson –  that traverses 336 miles of the driest, hottest, most hostile terrain in the western hemisphere. For perspective, the much-more-famous Panama Canal is only 46 miles long and the legendary Suez, just 48 miles. Have you made the drive from Phoenix to San Diego? That’s how long the CAP is.

Real rivers roll merrily along, letting gravity do all the work. Not the CAP. To get to Phoenix and Tucson, the aqueduct muscles its way 2,400 feet uphill, tunneling through mountains and even flowing underground as it delivers 1.5 million acre-feet of Colorado River water every year from Lake Havasu to the Valley and on to Tucson. Its 13 massive, round-the-clock pumping stations are immensely powerful, and make the CAP Arizona’s top consumer of electricity.

The Colorado River delivers about half the water the Valley uses each year via the CAP, though the distribution, storage, swapping, lending, crediting and debiting that goes on would make William Mulholland’s head hurt. The financial analogies are all too real – Arizona operates a state Water Bank to keep track of it all. CAP water goes to contracted users in Maricopa, Pinal and Pima counties, which include a dozen Native American communities, municipalities, industry and development interests. The biggest user though is agriculture.

The Lower Basin states use Lake Mead behind Hoover Dam as an on-river reservoir.  The Upper Basin’s reservoir is upstream at Lake Powell, behind Glen Canyon Dam. Per the Compact, the water levels of the two reservoirs must remain the same, relative to each other, which causes Lake Powell to sometimes send water downstream to Lake Mead. Believe me, it gets a lot more complicated than that.

In 1944, as war raged around the world and fewer than 100,000 non-air conditioned souls lived in Phoenix, the state of Arizona finally ratified the Colorado River Compact. We had stalled for more than 22 years.

How unhappy?  In one instance, in 1934, a mightily ticked Arizona governor called out the National Guard when the Feds and California starting building Parker Dam, siphoning Colorado River water to Cali without consulting Arizona. Governor Benjamin Moeur even launched a two-boat “Arizona Navy” to stop dam construction on the Arizona side. The enterprise seems laughable now, but it was no joke.  There were 20 machine guns trained on the dam site from Arizona, and 40 riflemen took up positions. Even the “navy” personnel had military-grade field rifles.

With disputes such as these settled more or less amicably by 1944 (things move at the speed of canyon formation in water negotiations) Arizona ratified the Compact, in hopes that would clear the way for CAP construction. That’s how long the CAP idea has been shimmering on the desert horizon.

What did we get for all that stalling, jockeying and navy-launching? The right to 2.8 million acre-feet of Colorado River water per year. That’s a huge amount – roughly enough water for 11.2 million people, if every drop was used for residential purposes, which it is not.  74 years later, just about half that many people live in the CAP service areas. No matter how you look at it, that’s good long-term planning.

It took imagination and guts to advocate for the CAP so long ago. Only about a half million people lived in the entire state in the 40’s, and only a few could picture Phoenix as one of the nation’s largest cities, or foresee a day when the Tucson area would have more than a million people.

Arizona Senator Carl Hayden was one of the handful of visionaries. In Congress for an astonishing 56 years, Hayden bulldogged the CAP for more than a quarter-century, finally seeing it authorized by President Lyndon Johnson just before Hayden retired in 1968 at age 88. (Johnson’s remarks that day were recorded, and live today as a remarkable online video produced by the CAP, which Johnson seems to narrate).

The CAP cost a mind-boggling $4 billion – Manhattan Project money – or about $30 billion today.  The Feds put up almost all of it. Arizona agreed to form the Central Arizona Water Conservation District to pay the money back, manage the canal system and commit to delivering Arizona’s entire allocation of Colorado River water.  The CAWCD is still at the heart of Arizona water management and is still working on all three of these objectives. You’ve probably noticed candidates for its 15-member volunteer Board on your November ballot.

Though it may have seemed a little crazy in 1944, when construction finally began in 1973, the arrival of the CAP was highly anticipated in Phoenix and Tucson.  The boom was on, and Arizona – most notably Tucson, which has nothing like the Valley’s Salt River Project – was pulling far more water from the ground than was being naturally replaced.

Getting the water here was a straightforward, though brutally difficult, process. Distributing it resided –and still resides – in the byzantine realm of lawyers, politicians, government staff and civil engineers. The word that comes to mind when perusing a CAWCD Board agenda is – dry.

Part of the plan was – and is – to use Lake Pleasant as a storage reservoir for entities around the Valley that have rights to CAP water, and for that purpose, the lake’s capacity was quadrupled as part of CAP construction. (Note to alarmed lake visitors: annual changes in the water level are related to whether CAP water is being accumulated or distributed, not weather conditions.)

Thousands of workers spent 20 backbreaking years digging and blasting through, over and under hundreds of miles of mountains, stream beds and forbidding, uninhabited terrain as the CAP snaked its way to central Arizona’s population centers. In 1993, the canal reached its endpoint southwest of Tucson and was declared substantially complete, though it is still not finished. It may take another 10 to 20 years to build all the distribution facilities.

So who gets the water? Sorting through who gets it and why is something like thwacking though a brush-choked arroyo with an Exacto blade. In your underwear.  Suffice it to say that in order to access the water, municipalities, Native American communities, agriculture, industry, and development interests must have contracts with the Central Arizona Water Conservation District, which is itself contracted by the US Department of the Interior to receive and distribute CAP water. A separate entity, the Central Arizona Groundwater Replenishment District, operated by the CAWCD, can utilize CAP water to help developers and growing cities meet their legal requirement to demonstrate long-term (100-year) “assured water supplies” by agreeing to replenish the groundwater those entities withdraw that exceeds the limits set by state law. The CAWCD can levy a tax to recover its costs from municipalities. Everyone else pays a fee. This is particularly important for some West Valley cities, which are not part of the SRP system and are far from CAP aqueducts.

Drought afflicts the Colorado River Basin these days, though water levels are not at a critical stage and there is a long way to go before reductions come into play that would affect daily life in the Valley. Still, conservation is not only prudent but part of the ethos of living in a dry place, and the CAWCD encourages everyone to practice it.

Like the desert sun, CAP-delivered water is seemingly everywhere in central Arizona. And like a lot of Arizonans, it’s traveled far from home to make our state what it is today.

About those ten facts!  Here they are: 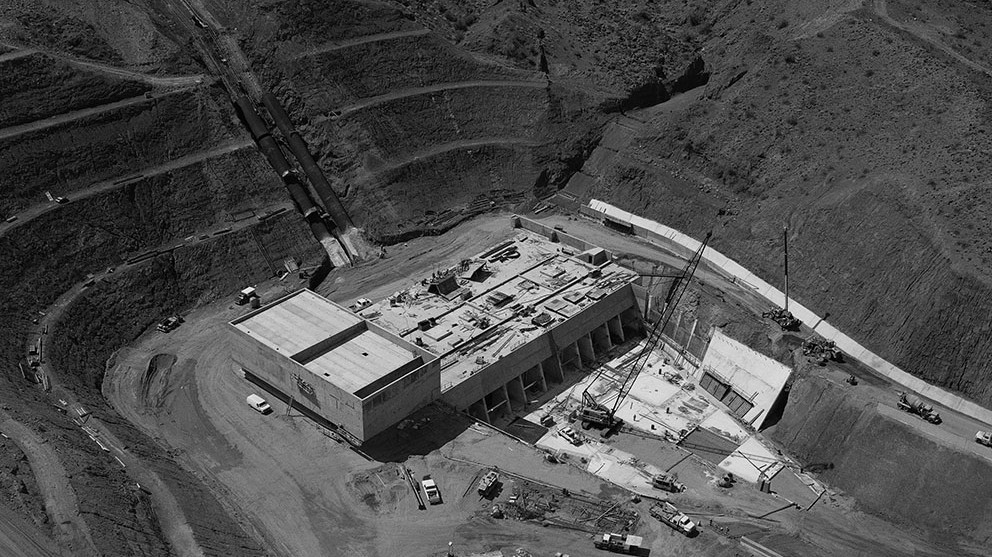 The end of the line is 12 miles southwest of Tucson. Water arriving there is used to replenish Tucson-area groundwater. 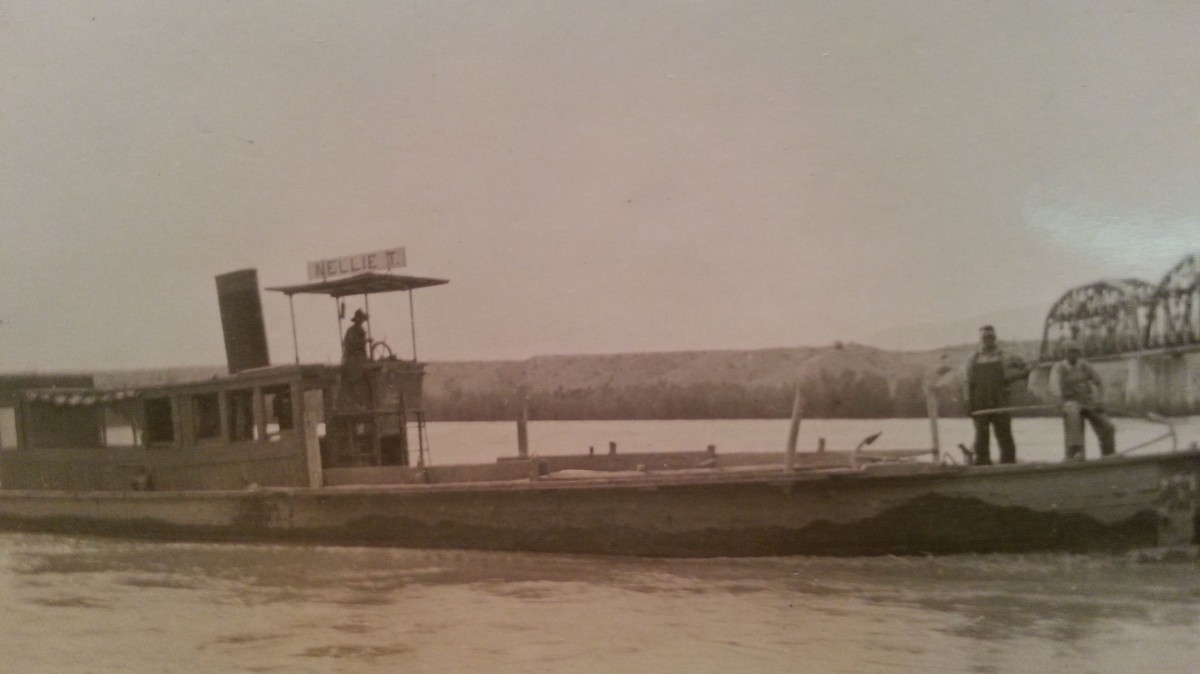 Bonus to the bonus: Rhodes went on to become known as one of three political leaders (Barry Goldwater and Pennsylvania’s Hugh Scott were the others) who delivered the news to Richard Nixon that he did not have enough support in Congress to stave off impeachment and probably faced conviction, triggering Nixon’s resignation from the Presidency in 1974.

More river water is exported from the Colorado River than from any other river basin in the world. -Ted Cooke, CAP General Manager